When I learned three years ago that India was embarking on a journey to build 100 smart cities I promised myself that I would find a way to be part of their Smart City Mission. Having been the Smart Cities Leader in the Benelux for a Big Tech company, I was one of the pioneers of smart cities in Europe. Using technology to help a nation of more than a billion people transform itself sounded like the ultimate smart cities challenge. The promise to myself however was not followed by any action and remained nothing more but a dream. So when last month the opportunity came to join the Netherlands Trade Mission to India as part of the Dutch Smart Cities delegation I did not have to think twice whether I should join.

India has over 8000 cities and villages. About 100 cities have more than a million inhabitants. The country is urbanising at record speed. Ten years ago Bangalore had about 1 million people, while today, depending on whom you talk to, the city has 10 to 13 million inhabitants. On a Saturday afternoon I witnessed the traffic grinding to a halt and a brave taxi driver that did not manage to get his car thru without damage. According to the World Bank 1 in 5 Indians is poor and 80% of those people live in rural areas.

The boldness of India’s Smart City Mission is impressive and inspiring. Almost a hundred cities have submitted plans and are on a path to execution. But like every great endeavour the Mission has its fair share of local criticasters. During a conference at the 2018 Smart Cities expo in New Delhi, the chairman of the panel asked the room to raise their hands if they thought the mission was a success. No one did. He repeated his question, thinking the audience may have misunderstood, and again, no one raised their hand. When he asked who thought that the Smart City Mission was a failure, about 50% of hands in the room shot up in the air. Someone on that same panel said that “… we in India must learn to adopt a 100% mind set. Europe has great smart cities because they go for 100%. We dig a gutter, lay state-of-the-art glass fibre, and fail of close the gutter. Changing this 80% mind set, also in our approach to smart cities, is imperative”. Another critique – particularly from the urban planning community – is that the vision is in place but that an overall masterplan is missing.

India’s challenge is daunting: lifting so many people out of poverty, getting a grip on their rampant urbanisation, doubling the income of farmers in rural areas, and creating inclusive growth for all whilst saving the environment are just a few of the tasks ahead. Doing this in a democracy of 1.3 billion people, living in 29 states and over 8000 cities and villages may almost seem like an impossible mission. The sheer scale of the challenge defies conventional ways of thinking and paradigms. It would therefore be a mistake to think that the smart cities lessons from Europe can be copied 1:1 to India. Given the size and the urgency of the challenge in India, the vast diversity of the country, and their possibility to leapfrog (e.g. through mobile payments, biometric citizen identity management), there may be lessons for Europe to learn from India. For instance on how to develop pilot initiatives that do scale. This notion of a two-way street is the promise of smart cities thinking the globe over. 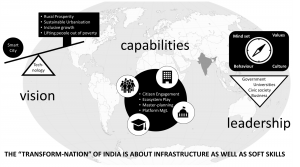 India has the technology to fulfil the Mission, the mind set apparently can be improved. A matter of building “soft skills”: a cultural shift in both the public and private sector, collaborative capabilities, and KPI driven change management. Capacity building, just like the building of houses and (digital) infrastructure, is key. This is widely recognised – actually India’s SC mission started out with engaging citizens – yet nowadays pure infrastructure projects seem to take precedence. I have pleaded before that these processes must run in parallel: the confluence of smart infrastructure, smart citizens, and a smart society is what makes a Smart City work. Smart Citizens is all about engaging citizen in such a way that they adopt responsible behaviour. In India the question often asked is: “Is it possible for citizens to engage on an empty stomach?” Yes it is, and it must be. The only way to sustainably improve people’s lives is to help people help themselves. So no matter how hard it seems and it also is, citizen engagement is the cornerstone of digital transformation, also in India.

Transforming a nation into an inclusive, sustainable and prosperous society, while maintaining a vibrant democracy is to me what Smart City India is all about. Technology must be part of the solution, not as a mere enabler, but also as a lever. Technology is what makes smart cities possible at the scale and scope that India needs. The vision is clear, the execution can be improved by new capabilities and the right kind of leadership. Combining the lessons learnt in Europe (scalability, ecosystem play, systemic approach) with the realities and scale of India seems the best way forward. After spending only three days in India, what started out for me as a dream, has now turned into an ambition. An ambition to be part of India’s imperative Smart City Mission.